Everything that is made on earth by humans has a specific life that it works, after that, this product starts to decay or degrade in performance and in the end it may totally collapse or become obsolete. The designers of that product either it be mechanical or electrical takes numerous parameters into consideration to enhance the life time of that product. So these types of electronic items those which have completed their time and become obsolete or have become faulty, or out dated or damaged and become non-repairable will be thrown as "scrap items". These scrap electronics is what contributes to e-waste. The business of scrap and e-waste is a very big industry or multibillion dollar industry. There are countless electronic products that are being scrapped on daily basis throughout the world and this scrap or e-waste is being bought and sold at various prices. Mostly the e-waste or scrap is exported from the USA to China and other countries where it is washed in polluted water of river and then put on sideways to dry up. After that it is then forged by numerous ways like sanding, painting and applying false marks to make it look new. Hence we can say that the biggest source of the counterfeit components is the e-waste or scrap electronic market itself. It is the responsibility of the governments to devise a strategy to properly dispose of e-waste and scrap electronics so that it may not be accessible to "counterfeiters"

What is Counterfeit Electronic Components?

Many of us might have gone through some electronics parts to be used in hobby projects. Let's say a 555 timer IC is used in an A-stable multi-vibrator circuit. Now the circuit is developed on breadboard and all the wire connections are intact. Power supply is good and you just turned ON your circuit and put oscilloscope at the output of 555 timer IC but you did not get the waveform. You then checked the oscilloscope settings and found perfectly fine. Now you start to think why my output is not coming, because you have blind believe in IC that it has no problem. You are constantly looking errors in your connections, breadboard, oscilloscope and other passive components, then after struggling half or one hour you realize that the IC itself is "counterfeit" or "fake". So what happened in the process is the complete waste of your time, money and effort. This what counterfeit components do..!

A counterfeit component is the low quality, faulty and underrated component that is disguised as high quality or new component and it does not perform function correctly or malfunction causing problems for end users or buyers.

Why Counterfeit Electronic Components are made..?

Now that we understand what is counterfeit electronic components and from where mostly they emerge. As for the reason why they exist in markets is the simple reason "Money". Yes, it has been estimated that this counterfeit electronic components industry is so huge that semiconductor industry alone was hit by a huge loss of around $75 billion each year. This monetary loss to the genuine semiconductor industrial sector is converted as earnings for "counterfeiters". But it may be noted that Original Component Manufactures (OCM) have their manufacturing facilities in various countries of the world like China, Singapore, Indonesia and Malaysia. For-example the headquarters of a particular OCM may be in USA but its facilities/factories working in China may develop various levels of quality of a particular component, but they do mention about the quality, performance and also gives guarantees and warranties which is not the case in counterfeit electronic components being sold by "counterfeiters".

Reason Why We should not use Counterfeit Electronic Components:

As mentioned above by the example of simple 555 timer IC, the main reason why you should avoid using counterfeit electronic components is because it will not work as expected, it will malfunction, it will be a waste of time, your energy and money.  This is with aspect of a student or hobbyist working on a final year project or doing experiments for learning so it may not be a big loss. However if you are an ECM ( Electronic Contract Manufacturer) and your production facility has ordered 100,000 pieces of 555 timer IC and out of which 1000 counterfeit then this will be a big issue. The losses are multiplied in terms of every aspect like production cost will increase due to counterfeit components themselves, waste of resources used in production line for example if the components are soldered then whole PCB batch may have to be discarded, the labor cost (hourly wages) of that batch run was wasted, other overhead charges and electricity charges are also counted as loss due to only those counterfeit parts.

Moreover, these above mentioned losses are in the case when the faulty PCB batch (due to counterfeit parts) was caught on right time. But if the production facility members could not catch the problem then the resulting faulty or underrated product will be distributed in market thus annoying the customers and degrading the company's (ECM's) reputation. This will cause lower future orders and customers may lose confidence. 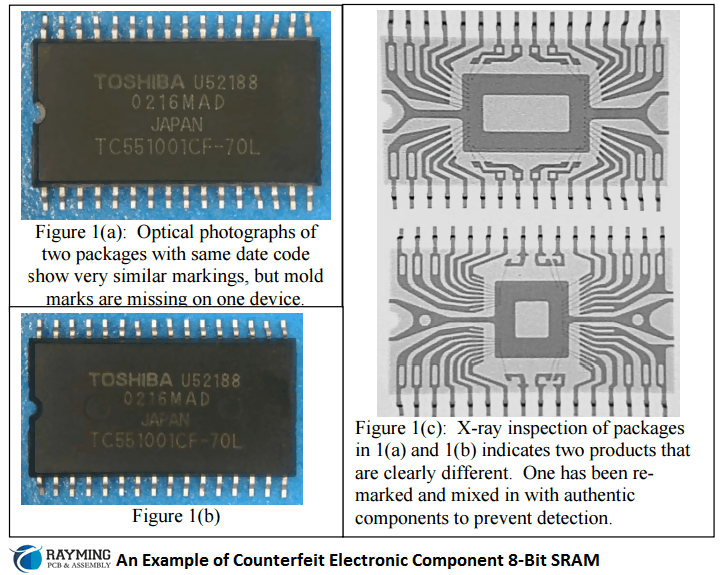 Another reason Counterfeit components should not be used is because they can be dangerous to the overall device or system where they are installed or soldered. Because they can malfunction, or can become short circuit leading to sparking or catching fire or totally damaging the end product/device or even injure the person using it. For example a counterfeit Lithium ion battery can swell and exploded thus injuring the mobile phone user.

There is a large number of electronic components sellers, distributors, resellers, wholesalers and manufacturers who deal in electronic components. Majority of them are selling genuine parts but many of them are also among those "Counterfeiters". These counterfeit components are also called forged or fraudulent components that exist in almost every electronics market. Talking about the ECM, it is the responsibility of   supply chain and procurement department to contract very carefully with only those distributors or franchises that are authenticated by OCM (Original Component Manufacturers). It is best to buy components directly from OCM but if not possible then always search for genuine authorized dealers from OCM in your respective country. There are many types of counterfeit components you can encounter. Some of them are

This type of counterfeit component is the one in which a poor quality part's surface is "sand down" to remove the original markings and then reprint the fake part number to resemble the new high quality component which it is not in actual. Then they polish the surface using thin layer of Blacktopping material.  Sometimes they mix small quantity of low spec parts with large quantity of genuine parts so they cannot be easily identified and sell the whole lot with price of high spec/genuine part per piece. 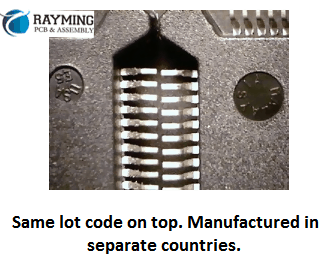 As the case above shows the low quality or low grade component are sold by tuning their appearance, here in this case the completely defected component is taken and then same procedure above is repeated and made it look like new part and sold at higher prices. You should be aware of these illegitimate practices of counterfeiters as they can strike a serious dent in your business as discussed above in detail.

In this case, the used parts are polished and appearance is changed and looks shinier than the genuine part. The problem is that they do not tell their customers that this is used component and it is refurbished but they sell them as new and charge cost of new component which is totally illegal.

How to tell the component is Counterfeit.

3- A solvent like acetone or a solvent that is a mixture of 3 parts spirit and 1 part alcohol in order to remove any fake coatings/markings on the surface of IC.

The common methods to identify a counterfeit component are

1- Check for misspellings and wrong information on labels.

2- Ensure that part number and date coding on the label match those on the part itself.

4- You can check out for any blunder mistake like date code of the "future" labeled on the IC package.

5- Check out for incorrect logo 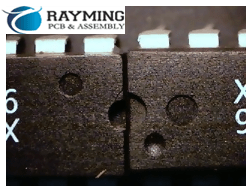 For example, in the picture on the right, these two parts were received in the same lot and have identical part number markings. These are the same ends next to each other and you can see that one has 3 indents and the other has just 2. The shape and size of the indents are also different. One is a rounded cavity and the others are all flattened.

Another example of indent is this shown in the figure. The indents from the manufacturer or OCM are always clean and uniform in each and every part of the lot. However this indent shown has been filled up with blacktopping materials that was used to disguise the surface by hiding the old surface. 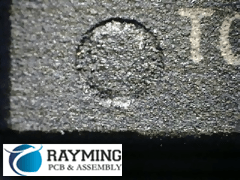 One more example shows the clear and obvious difference between the two parts having same part number printed from same lot. As shown in figure below the indent on one is much larger and on other it is nonexistent. This is clear and obvious example of counterfeit electronic component.

How to Avoid Counterfeit Electronic Components:

3- If not possible to buy from OCM, then go for OCM authorized dealers, suppliers or franchises

6- If you cannot deploy an inception team due to budget constraints then you can outsource the job to third party Company to avoid this headache and speed up the process.

7- Always try to avoid obsolete components in your designs but if unavoidable always look for trusted partner in component sourcing that will not deceive you.

There are numerous examples of counterfeit electronic components that are floating in the electronic markets. Countless number of sellers, distributers and shops are dealing in these semiconductor electronic ICs, but it is the responsibility of the procurement division of the ECM ( Electronic Contract Manufacturer) to rigorously control purchase source and always try to buy directly from OCM (Original Component Manufacturer) or any authorized dealer or franchise of OCM so that the risk of obtaining forged parts is minimized.