Arduino Projects
An Introduction to Modular Electronics of Raspberry Pi

An Introduction to Modular Electronics of Raspberry Pi

As the world of electronic engineering is becoming more and more advance, the engineers are continuously striving for more complex and miniature designs. This struggle and related research work has led to the advent of “modular electronics”. The modular electronics means that instead of developing an electronic device from basic discrete components, the modules of circuit are installed and configured on a larger PCB board and then interfaced with each other to get the desired results. 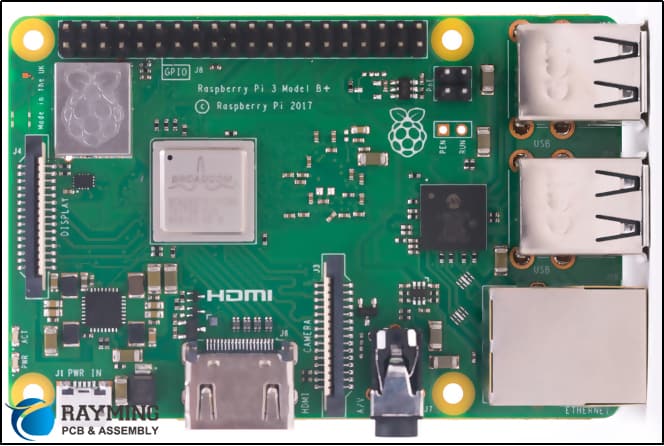 In this article, I will tell you about something similar to this and we will discuss the basics of the all popular and compact module of electronics engineering called “Raspberry Pi 3“.

Unlike old and discontinued electronics, where large TTL and CMOS ICs were used to define the basic digital functions like AND, OR and NOT and where the THT type transistors and Mosfets were used for switching devices nowadays the Raspberry Pi has replaced all those circuitry. The Raspberry Pi is like a small computing device that has all major features on one single board. Like CPU, GPU, USB ports and GPIOs (General Purpose Input Outputs) are all contained in a single compact board.

Raspberry Pi was invented in the theme to help students learning programming skills and get used to various mathematical functions which can be learned on a common desktop computer. Now we will compare different versions of RPI (Raspberry Pi). 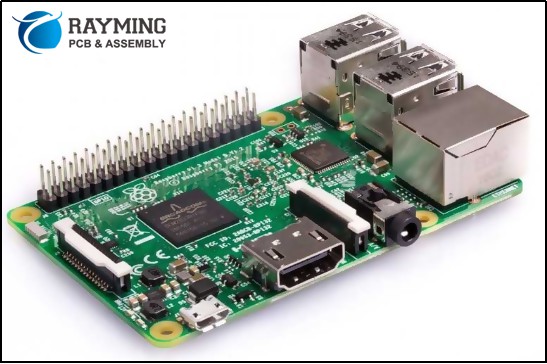 The operating system and user data is stored in microSD card. High current 2.5A micro USB port as power source.

100 base T Ethernet that can connect to router for internet connection, 40 pin GPIO to communicate and send and receive commands to and from external peripherals and 4 USB ports are available as in earlier versions. 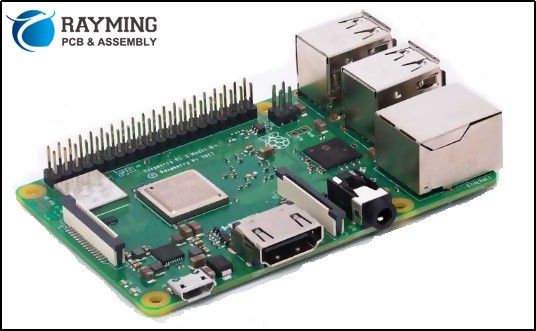 Introduced in 2018, this model of Raspberry Pi is 3B+ and it has Broadcom chip BCM2837B0 Cortex A53 (ARM version 8) 1.4GHz, 64 bit System on Chip (SoC) quad core processor. This processor performs numerous mathematical and logical operations and execute multiple instructions. The VideoCore IV runs at 400MHz and is a very powerful GPU that supports video gaming. Capability to play 1080 MP video.  It supports Power over Ethernet PoE HAT (Hardware Attached on Top). 2.4GHz and 5 GHz IEEE 802.11 b/g/n/ac wireless LAN. It has BLE 4.2 version.

This version has network boot and USB boot options that make it useful in hard to reach places. 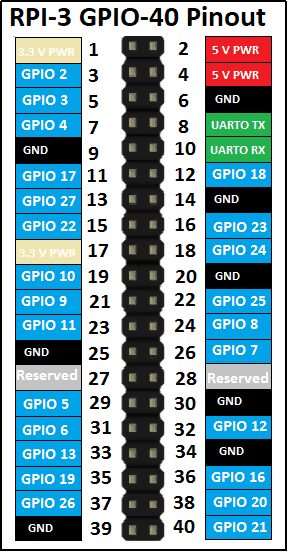 PoE not supported. Thermal management is improved due to absence of Ethernet controller on board.

RPI-3 is equipped with WiFi and Bluetooth functions that were lacking in RPI-1 and 2. The serial UART pins are used for serial communication, data conversion and debugging. 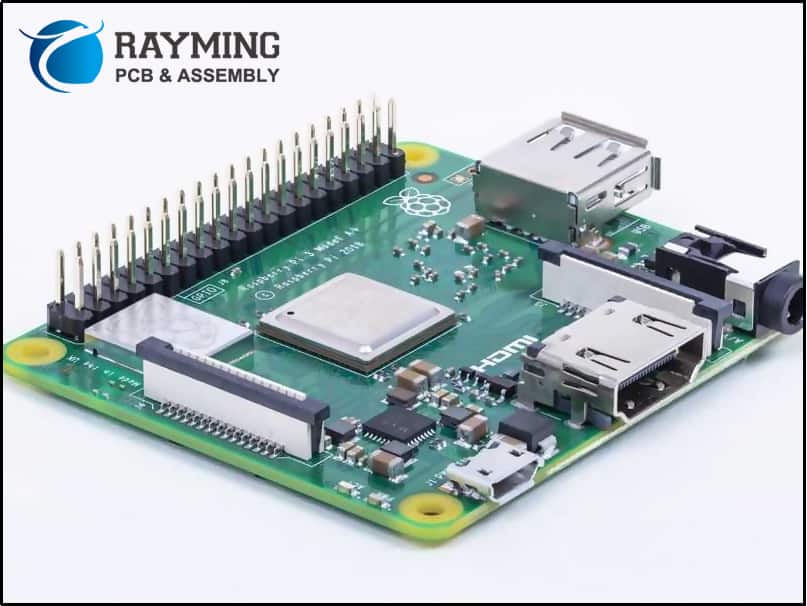 The latest version of the Raspberry Pi series of boards is RPI 4. This is version has some very interesting features like it supports dual 4K displays by means of dual micro HDMI ports. Many advance features are added so that it can work like an actual computer. The RPI-4 software is backward compatible. Whatever you design on RPI-4 will also run on earlier versions.

The RPI-4 is a complete desktop computer. It has an astounding feature of smooth functionality while browsing on internet, documentation or editing, opening multiple tabs of internet explorer and similar work.

This is a more cost efficient machine as compared to common desktop PC and it is very effective. Salient features are high speed networking, Very low noise processing, low energy consumption, support USB 3 and options to choose RAM as you desire. 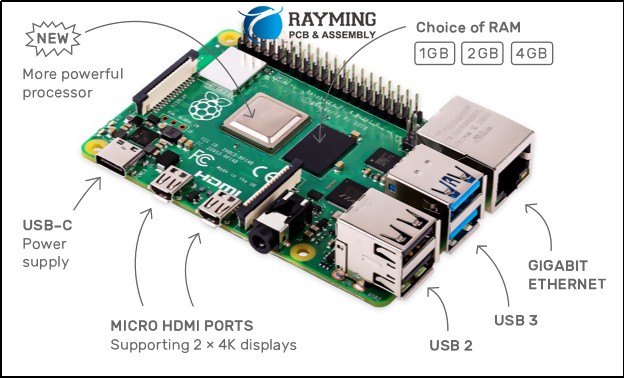 Some Technical Specs of RPI-4: 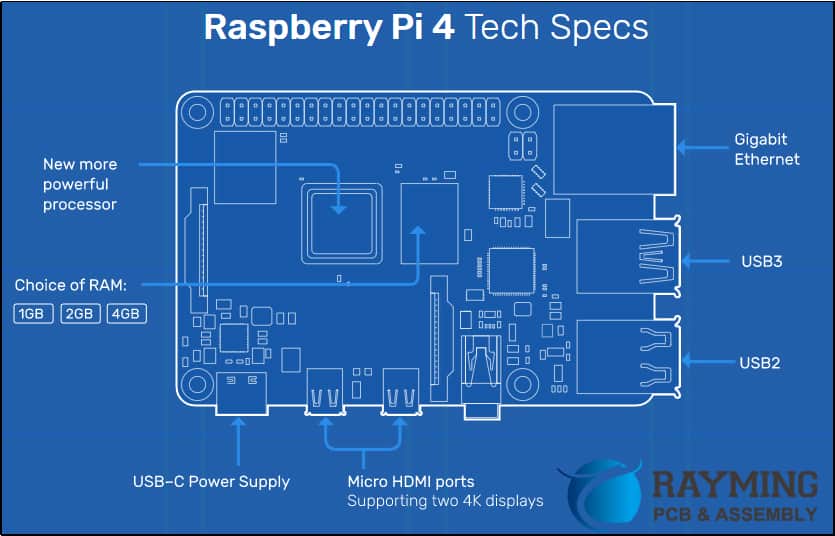 The official Raspbian Linux OS. Moreover third party operating systems which can run on RPI are Windows 10 IoT core, RISC, Media Center and Ubuntu. The windows 10 IoT is a limited version of windows 10 and can run single screen app and can support background software running. But still running windows 10 OS on this tiny device is not a good option because of processing power it demands.

Some Important Things to Know About RPI:

Protect it from heat. Keep it in enclosed case. Run official Raspbian OS. Visit RPI website. https://www.raspberrypi.org/ to get extra help. Do not purchase expensive microSD card 64 GB, just purchase 8GB SD card and install official Raspbian OS and it will fulfill all your needs. It cost around $35 so it can be a good investment. The “Overclocking “mechanism can cause the RPI to run much faster than its defined speed but it can rise temperature that could damage device. The rise in temperature can be countered using heat sink. Software Overclocking does not void warranty.

The RPIs can perform most of the functions like desktop computer. For example Video Gaming, Media Streaming, Home Automation, Robotics, Internet and Browsing,

Previous Post: Why is EMI Worsening after Switching Power Supply Irrigation Glue?
Next Post: How To Cut PCB Assembly Cost While Maintaining Quality