The Designs of Wireless IoT and RF Modules Evolution

The RF modules have now become a vital ingredient of almost all Internet of Things (IoT) based boards and gadgets. These modules have been used in a variety of IoT applications ranging from security cameras (IP based), trackers, and scanners (point of sale) etc. The RF modules are now being used in numerous medical devices as well. IoT is seeing a constant change due to its evolutionary technology and RF modules are also under constant change in its design. The RF modules are shrinking in size and its performance is increasing with each passing day. The small sized RF modules are becoming viable because of its advantages such as lower power consumption, lower time consumption, and best design and fabrication. The image below is further illustrating the use of IoT based RF modules in various industries. 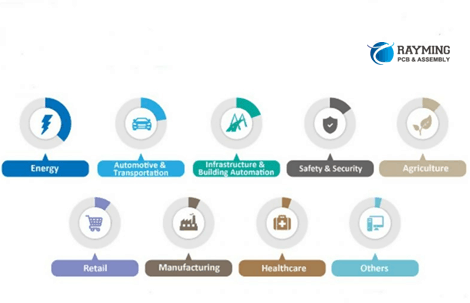 The RF modules which are readily available in the form of SIP (System in Package) are an integrated solution. These chips are comprising of all essentials such as antennas which are already pre-certified and pre-tested as well. This is how design complexities of the RF modules are eradicated and development time along with risk and effort has been reduced. These IoT based devices are already certified and have an extended peripheral capacities allowing developers to have a focus on the end application.

An Insight to the Wireless IoT based Modules

A valid question arises that when RF modules are being adopted for the IoT applications then what is being under constant evolution in engineering aspects? The first thing to consider is the power consumption, security of the devices, throughput of data, and other design specifications. The constant change is in the SIP solutions which are continuing to shrink in size and are incorporating a multiple functions.

The miniaturization of RF Modules

Taking Nordic Semiconductor’s foray as an example of the IoT based radio cellular design which has an aim of tracking and asset monitoring for various sectors such as medical, agriculture, smart city, and industrial applications. The basic fame of the Nordic is for its semiconductor industry based on silicon devices which are built on the Bluetooth standard. There is an interesting story behind a Norwegian based chip making company Trondheim, known for its short ranged RF modules based on Bluetooth Technology. The company had an influx of old cellular radio modules from various companies such as Broadcom, Nokia, Ericson, and Microsoft in years 2011 till 2014.

The company worked on these cellular RF modules and its engineers assembled it in the form of an IoT module which had an appearance of SoC even it was a SIP solution. For accomplishment of better design, company joint hands with another competitor i.e. Qorvo for having a leverage of RF front end, microshield, and advanced packaging eliminating the requirements for costly and bulky shells for RF modules.

Both companies ended up in nRF9160 which has a Qorvo multi-band RF front-end combined with the Nordic’s multi-mode LTE modem which is IoT based, and has a SAW-less transceiver as well. This SIP solution is further integrating the GPS support for having a surety for an accurate positioning at the time being isolated. The following is flow chart of the nRF9160 module co-produced by Nordic and Qorvo. 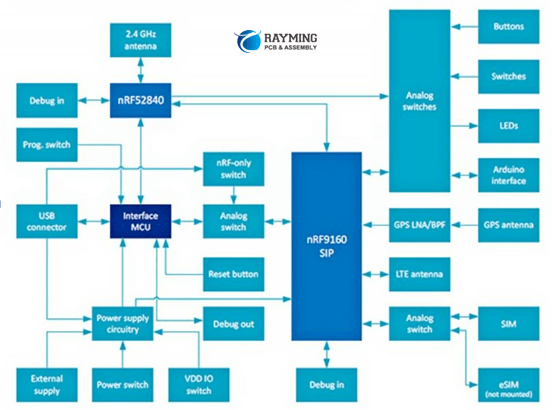 This RF module is featuring outstanding CPU core i.e. Arm Cortex M-33 which is supported by flash memory of 1MB and RAM of 256KB. These memories are enough for supporting different stacks protocols and other applications. This RF module is also having Arm Cryptocell and Arm Trustzone for security purpose. As per Nordic’s the RF module nRF9160 is the first ever cellular IoT based module which incorporates application processor eliminating the requirement of MCU for performing heinous task of security improving cost efficiency and design footprint.

The Arm Trustzone is separating the non-trusted and trusted execution zones while Arm Cryptocell is offering facilitation of cryptography along with few security centered platforms for better design having lower constraints and power consumption. It is a fact that offering security is one of the fundamental goals of IoT design. Nordic has a target of SIP solutions which are operating at different frequencies having a range from 700MHz to 2.2GHz and is able to measure 10x16x1mm in medical and wearable gadgets. Apart from the CE and FCC regulatory certifications, RF module nRF9160 is also having GCF certification. It has an integrated LTE firmware along with a kit for applications such as cloud connectivity etc.

The dual mode means integration of both short and long ranged wireless modules in to a single one offering best applications based on IoT. The simultaneous availability of both modes is complementing each other and creating a matrix of novel possibilities. For example, SIP has launched RF module which is integrating Lora and Bluetooth radio modes in to a single 9.8x17.2x17mm footmark. Another RF module ISP4520 is featuring processor of ARM Cortex M4F having a RAM of 64KB and 512KB of flash memory for support of Lora and Bluetooth protocols. The following is flow diagram of ISP4520 BLE-Lora RF module. 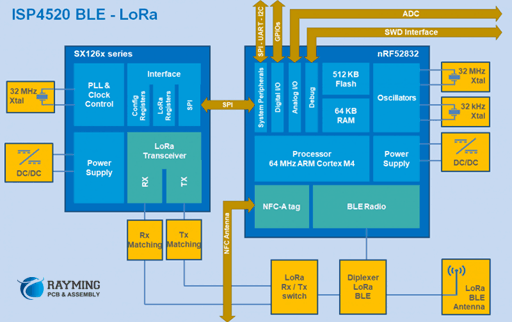 In this module, the Bluetooth part is manufactured by Nordic encompassing 32 KHz/ 32MHz crystal oscillators, matching circuit, RF antennas, and a DC-DC converter as well. This RF module is supporting various technologies such as Bluetooth Mesh, Bluetooth 5, 2.4 GHz proprietary Stacks, and ANT etc.

The Semtech SX126x family of the RF transceiver is supporting the Lora modulation and is being used in various cases grounded on global LoraWAN standard. These transceivers are specially designed for compliance with requirements of physical layer. Its powerful processor i.e. ARM Cortex M4F is also capable of driving Semtech RF transceiver.

Furthermore, for catering the expected rise in the consumption of power because of its capability to cater 2 wireless technologies, this RF module is also having different modes of deep-sleep as well. Its standby current is low to a range of 0.5uA but the actual current requirement of Bluetooth is about 5mA. The output power is deciding the power consumption of Lora modules. The RF module is also providing host for digital and analog peripherals comprising of 30 GPIOs, support for SPI, UART busses, A2D converter, and I2C. It also offers connectivity for NFC for an ease to have pairing and it has a development kit as well.

The innovation in IoT can be held responsible for having a shift from the traditional RF solutions to that of module based RF solutions which are more efficient in power consumption, better management of data flow, and has good physical interfaces. IoT is offering an ease to developers for utilizing the wireless channels for having a varied array of applications which ranges from smart cities and buildings to that of asset and security tracking.

The IoT based RF modules are evolving at a very fast pace and the day is very near when RF modules will be independent and multi-functional as well. It is to see in future that how IoT based designs will integrate both old and new wireless technologies and open new arenas of possibilities.

Previous Post: How to Determine the Number of Layers in PCBs
Next Post: PCB Flying Probe Test (FPT)