The fundamentals of electronics engineering is based on the principle of Ohm’s Law. Without Ohm’s Law current cannot flow in wires, voltage will not exist or any type of circuit in the world would not function. It is as important law of electronics as that of Newton’s Law of physics. However there are other many important principles and laws of electronics that need to be highlighted, but in this article we would learn the basics of Ohm’s Law and it three important parameters Voltage (V), Current (I) and Resistance (R).

An electronic circuit is nothing but the closed loop of conducting wires and electronic components connected with each other.

The voltage can be described as the potential difference between two points in the circuit. Its Standard International (S.I) unit is Volts. The voltage is the driving force to drive electric charge in the circuit. The greater the potential difference the greater the flow of charge (current) between two points. The voltage is measure “across” or “between” the two points. Some text books denotes voltage as “Electromotive Force (EMF)”. Hence denoted by “E”. It is called electromotive because it motivates the flow of electrons in the circuit or conductor. We can use either V or E to denote but both are correct.

Another definition of voltage can be explained in terms of Energy (Joules) and Charge (Coulomb). The Voltage or Potential Difference (P.D) can be defined as the amount of energy spent on 1 Coulomb of charge to drive it from one point in circuit to other point in circuit.

Joule is the S.I unit of Energy

The current can be defined as the amount of charge flowing from one point in the circuit to other point in the circuit per unit time. Its Standard International (S.I) unit is Ampere. The flow of current can be considered as the analogy of water flow in the pipe. The current is measured “through” the resistor or any other electronic component. Current is denoted by “I” that comes from word “Intensity” or current intensity.

Charge: The charge can be positive or negative charge depending upon the direction of flow of electrons in the circuit. The conventional flow of charge can be defined as the charge leaving the positive terminal of battery and entering the negative terminal. However in the electronic flow concept, the electrons leave the negative charge terminal and enters the positive charge terminal. In both cases the current will flow because this process is done very fast and continuously. The S.I unit of charge is “Coulomb (C)”. One electronic charge = Charge on electron =1.6x10-19C.

Relationship between V, I and R:

The mathematical relationship between these three quantities is linear. It means that out of 3, if we know 2 quantities then we can find the third one. Mostly the resistance is the inherited property of any conductor that is almost considered as constant. For example a piece of wire that has cross sectional area “A” and length “L” and its resistivity is ρ. The resistance can be calculated as

This shows that the resistance (R) of a conductor/wire is dependent on its length (L) and gauge (A). Where ρ is constant (resistivity) for conductor material like copper or silver.

Hence we can now say that voltage and current are dependent upon each other while considering the resistance R constant.

The Ohm’s Law states that the amount of current (I) flow through any conductor is directly proportional to the potential difference (voltage V) across it at a given temperature, provided the resistance (R) remains constant.

We shall consider a basic example of what is the current, voltage and resistance all about. In the below circuit we can see that a DC battery is directly connected to a lamp through conducting wires. The direction of flow of current is “conventional (from + to -)”. 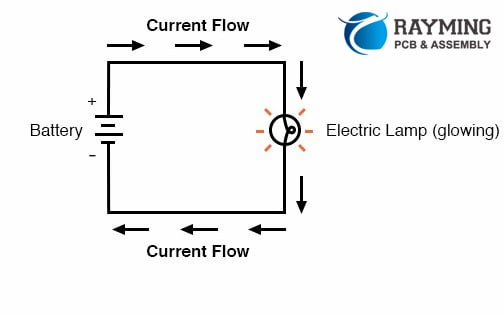 Here we can create three scenarios. 1- V and R known I unknown. 2- V and I know R unknown 3- I and R known but V unknown.

Let say the battery voltage is V = 12VDC as measure from “voltmeter” and lamp is the load having resistance = 4 Ω value found from lamp specification sheet. Now calculate the amount of current flow in the circuit

Apply Ohm’s Law we get

Let’s say battery voltage is 12VDC and current flow in the circuit as measured by the ammeter is 6 Ampere. Find out the load resistance.

The current can be measured in the circuit by connecting the ammeter in series.

Now we will again apply Ohm’s Law and get the result.

Now here we have lamp resistance already know as found from manufacturer datasheet. R = 10Ω and current is measured to be 1.2 Ampere from ammeter. Calculate Voltage of battery.

The Ohm’s Law is the basics of solving any electronic or electrical engineering problem. Either it is a low power low voltage electronic circuit, or a DC circuit, small miniature micro-controller based circuits, analog or digital circuits, microvolts or millivolt circuits, or either it is a large power or larger voltage circuit analysis like rectifiers, bridges, inverters or any other AC or DC power electronic circuits, these all are completely dependent on Ohm’s Law. Without memorizing this fundamental electronics principle you cannot solve any problem in the field of electronics and electrical engineering.