How to Read Resistor by Color Code

A resistor is a electrical component with two passive terminal. Resistors are used in electronic circuits, and provide reduction in current flow, adjustment of signal level, division of voltages, bias active elements, termination of transmission lines. The resistor is defined by its resistance value, usually the commercial resistors manufactured over range. Fixed resistors have resistances that only change slightly with temperature, time or operating voltage.

The color codes are used to indicate the values or rating of electronic devices , for example (largely) for resistor. It can also be used for capacitors, inductors and diodes and others. The resistors usually have smaller surface area, so it is difficult to provide those coded numbers or any other alphanumeric code. So resistor could rather code with colors. Therefore resistor given as 3 bands, 4 bands, 5 bands, 6 bands. These code must not be confused with the 25 pair color code, is used to identify wires in certain devices. Color bonds are generally used because they are easy to print over a small surface area available. The color band indicates tolerance, temperature coefficient and resistance. Each color has its own representation for different parameters. Table below will represent various parameters related to color codes. 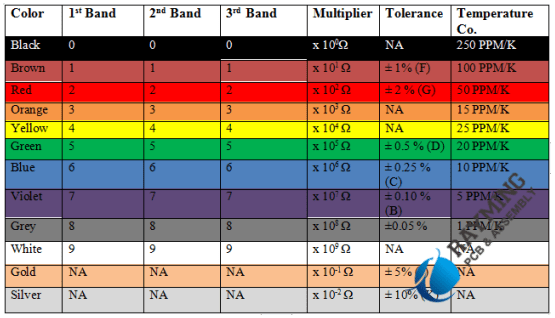 A usual method to remember these codes can be done by this sentence, in which all Upper case letters indicates one color. “ B B ROY Of Great Britain has a Very Good Wife wearing Gold Silver Necklace”.

In order to get the value of resistance we must not start calculating, by the respective color code. Some visual clues are there with resistor color code. But the order will follow as given in the above table. Here are some points enlisted below to identify

1. There is an increased space that occurs before the tolerance band. The spacing between the band is not constant. So we are require to put the larger group on the left and start reading from left to right.

2. Most of the times the 1stband is closest to the end (not necessarily all the time).

3. If there is gold or silver band on the resistor, it is a tolerance band.

One way which we can always follow to measure the resistance is by using millimeter. Because sometimes the manufactures catalogue related to the color code of resistor. Here some examples which explain that how we can calculate the value of resistance.

Since brown has 1 and the black has it as 0. And the multiplier will be 101 for the 3rd band brown color and since there is no fourth band the standard value of the tolerance will be 20%. Therefore for this condition the value of resistance will be

Let’s consider one more example of resistor of 4 bands having colors brown, red, green and yellow respectively. According to the above given table,

Sometimes for 4 band also there is no value of tolerance similar to the 3 band resistor. So default value 20% can be taken. In the similar way 5 and 6 band can be coded and all the six columns of the above given table can be used to provide an appropriate color code.

Let’s consider a 5 band resistor has colors Yellow, Violet, blue, black  and brown respectively and the series given in the table will followed.  So when we include this 6 column as well it will give us the value of temperature coefficient. Therefore for the value of coefficient

There is another class of resistor also available which is known as zero-ohm resistor. This type of resistor usually have single black band. It is basically used with a printed circuit board, instead of a simple jumper wire.

There are also certain disadvantages of this system, people who are color blinded are not able identify the type of resistor. When such color coded resistors are placed in working overheating of a component, dust and dirt accumulation make it impossible to differentiate between few colors used in resistor, eg. Yellow and brown. Overtime the development in technology makes it possible to print the numbers over the small components. Therefore nowadays these alphanumeric codes are being printed instead of the color codes.