Benefits of Multilayer PCB and Applications

Today Printed Circuit Boards (PCBs) have become the integral part in many devices that we use in our daily lives. From handheld portable electronic devices, to industrial machines and heavy equipment, communication devices and consumer electronics we see everywhere these PCBs. Today’s PCBs are very complex and different shapes and materials based. They are flex and rigid and have variety of components that are wired together to perform a specific requirement. However this is only possible in the case of multilayer PCBs.

In older times the PCBs were only single or double layer and did only serve the purpose of simple computation or automation while today these PCBs are more advanced and multilayer and flex PCB are commonly found in motherboards, smart phones, smart watches, biomedical instruments, crypto currency mining devices, artificial intelligence based robotic circuits and many more. Also the manufacturing methods have improved in recent past enabling the faster production, cutting down production cost and reducing size of PCBs.

What Is a Multilayer PCB? 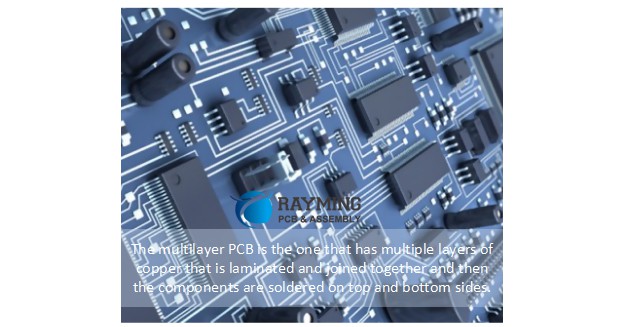 The multilayer PCB is the one that has multiple layers of copper that is laminated and joined together and then the components are soldered on top and bottom sides. The inner layers are actually the double sided circuit that are combined with each other to form one thick PCB with multilayers. The components are electrically connected by means of copper tracks and vias and pads/ holes join the interconnections. The vias are of different types like PTH, blind and buried. The result is the complex PCB with maximum circuitry on smaller PCB size.

Why Multilayer PCB is needed?

The advent of complex processing and evolving technology, demands the need of PCB layout procedure that can achieve the desired requirements. Also the problems that were occurring in the single or double sided PCBs like noise and stray capacitance was also an issue that caused the invention of multilayer PCB.

How many layers for Multilayer PCB:

The multilayer PCBs nowadaysare becoming widespread and available in very small form factor or sizes as compared to single or double sided PCBs. Their thickness also is variable and defendant upon number of layers. Commonly the multilayer PCBs are available from 4 layers to 12 layers depending upon the application and requirements. The layers are usually in even number say 4 layer PCB or 8 layer PCB, the odd numbered layers will cause problems of circuit wrapping and similar type issues. The multilayer PCBs are costly to produce as compared to single sided because of extra steps involved during PCB fabrication but their application are very huge. For example a smart phone can have a PCB with up-to 8 layers and a military electrical equipment can have a PCB with up-to 100 layers. This type of PCB with so many layers are very rare and costly. 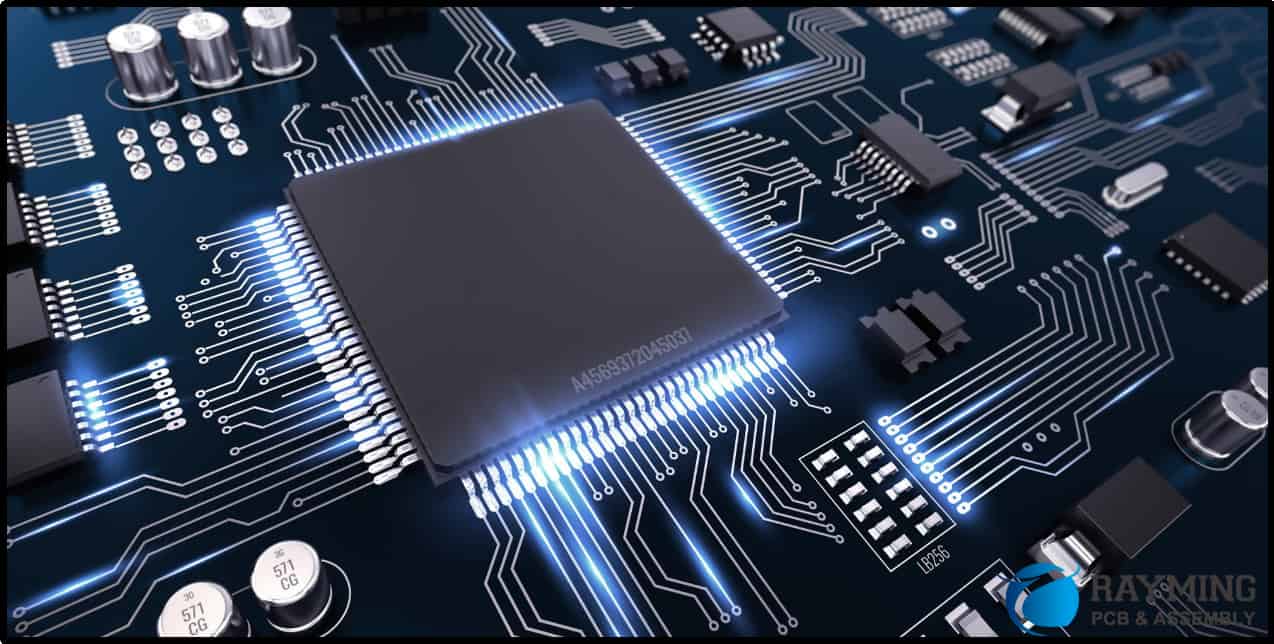 There are many advantages of multilayer PCBs that are mainly due to technical perspective. They are as mentioned as below.

The most important advantage or we can say the most significant reason for the invention of multilayer PCB is it small size or form factor. The size is reduce due to multiple layers being stacked upon each other and connection by “vias”. This result in more compact, dense, solid and smaller sized PCBs like was never seen in past. These compact multilayer PCBs are increasingly used in mobile phones, laptops and wearable electronics 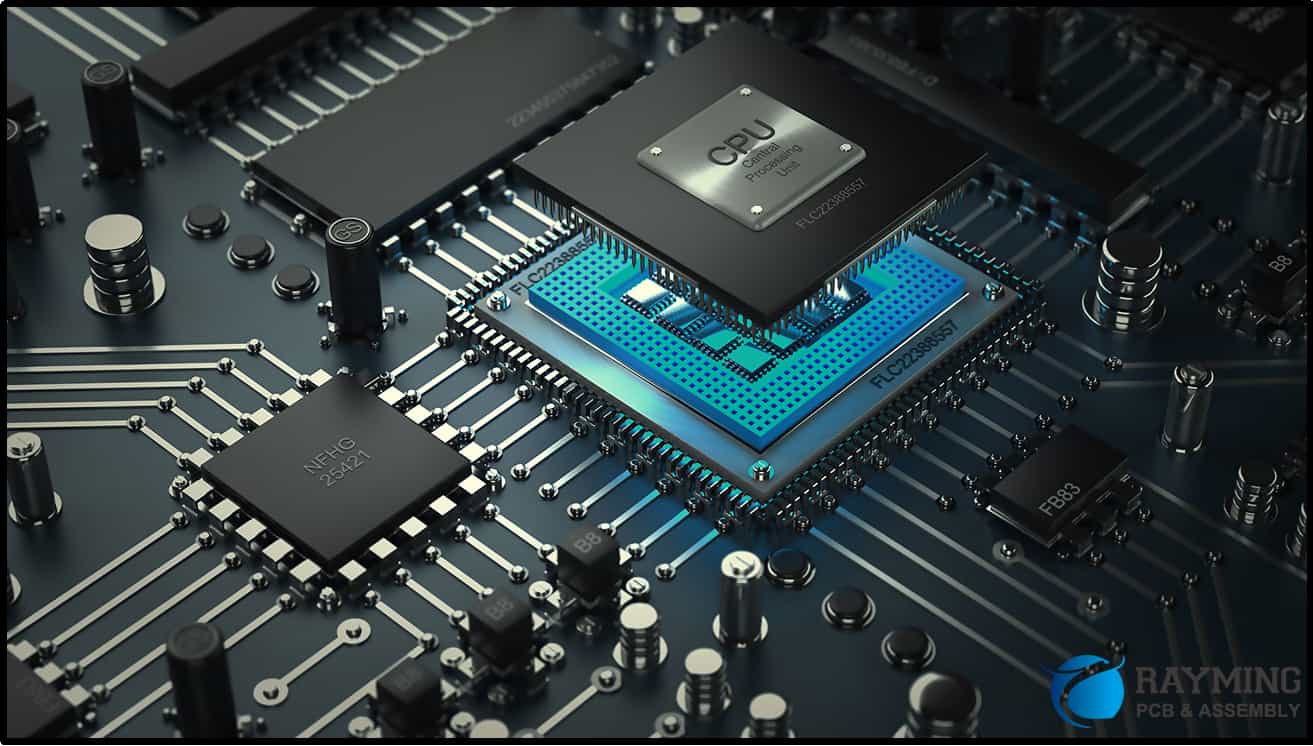 The small size of PCBs will ultimately reduce the bulkiness of PCBs. So the multilayer PCBs are usually light weight and can be easily portable and used in handheld electronics.

These multilayer PCBs are high quality in the sense that they are fabricated in a very well organized way and the amount of effort and work load invested in their fabrication is definitely more than that of single or double layer PCBs. Hence more quality and reliability results.

The high pressure applied to bind the multiple layers with each other, high temperatures and heat environment through which these PCBs go during fabrication process and bonding agent and protective layers that make these PCBs solid and make them strong and durable.

The density of a PCB is directly proportional to the amount of components soldered on a per unit size of PCB. For example 20 components placed on per square inch of PCB is denser than the PCB having 15 components per square inch. So the multilayer PCB most important advantage is its higher density as compared to its counterpart signal and double sided PCBs.

As we have seen in many old electronic equipment that the power supply section, video processing section and display driver sections of a TV were fabricated on separated PCBs. And they were integrated with each other via different connectors and sockets and complex wiring required. Nowadays, the LED TV comes in a PCB that has power supply, LED driver circuit and mother board all incorporated on a single PCB and single point of connection is required to install in the enclosure and lesser wiring / harness is required. This helps in ease of installation and dismantling the unit when repairs and troubleshooting is required.

Along with many benefits discussed above for the multilayer PCBs, there are also disadvantages that are also vital to discuss. They are directly relevant to the applications that do not require much more complex circuits and are lower in cost. The disadvantages are mentioned as under

Yes the multilayer PCBs are very costly as compared to the single of double sided PCBs. This is because the manufacturing process is complex and requires much more labor and time. Also the assembling of these PCBs is a complex job hence more man hours are required thus raising the cost of PCB. Also the machinery required for fabrication / manufacturing of multilayer PCBs is very expensive and classical. Moreover, any smallest error in the design or during fabrication can lead to the complete failure of PCB resulting in scrap and wasting time and money. All these factors contribute to relatively increase production cost of multilayer PCBs.

As discussed above, the slightest flaw in the design can lead to the PCB useless and scrap. Hence more careful manual and automated inspection required that turns out to be complicated work.

For Multilayer PCB, the design must be lay out by a professional engineer who has experience in multilayer PCB layout design. There are numerous problems that can result if design is not carefully made. Some of them are high speed circuit’s noise, stray capacitance, impedance mismatch, improper thermal pads and grounding etc.

The multilayer PCBs are complex to manufacture that ultimately leads to longer manufacturing time. So overall the customer would receive his PCBs with delays in manufacturing. Especially if some issue or problem arises in design or manufacturing process then it has to be reverted to design or fab house to eliminate the error and fabricate again.

As discussed above advantages and disadvantages of multilayer PCBs, we have understood the difference between two main types of PCBs. Some major difference or comparison between the two are as follows 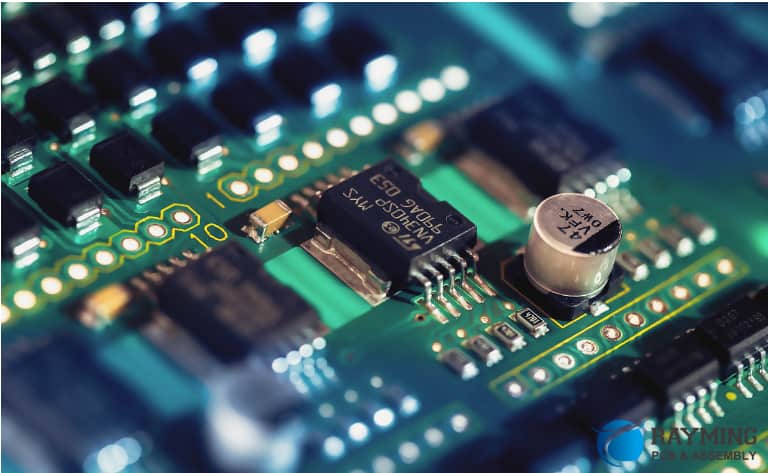 The multilayer PCB can accommodate more components on a specific area on PCB as compared to single layer PCB resulting in more advance and complex circuitry.

Multilayer PCBs are small in size due to denser PCB as compared to single sided PCB.

What to Choose Single Sided or Multilayer:

This all depends on your application. If you need a product to be lesser weight and smaller with more electronic circuitry then go for multilayer or if you want a product where size is not a matter than go for single sided PCB.

The term “Consumer Electronics” is a wide term that includes many electronic devices that comes under the umbrella of commonly used devices that are directly relevant to common users like you and me. The consumer electronics include, smartphones, smart watches, calculators, TV remote control, mp3 music player, toys, kitchen appliances, washing machines, electric kettle, e-cigarettes, LED bulbs and energy savers etc.

With the emerging needs of modern technology as mentioned in above different types of industries and applications, the need of multilayer PCBs is increasing day by day. This multimillion dollar industry is rapidly increasing due to huge demands in the sector that can pay more money to achieve their goals of small size, light weight, durable, rugged and complex functionality products. While on the other hand, these multilayer PCBs are costly, requires more man hours and time, fabrication / manufacturing process is complicated but that all rules out the fact that people in those above mentioned industries are willing to pay more and can wait more for the exquisite product to be developed that will eventually pay off and completely satisfy customer with all aspects as required.