With the rising scope of miniature electronic devices with properties such as light weight, small size, many functionalities and reasonable price, the trend of Integrated Circuits (ICs) packaging has been constantly improving. In this context the most powerful IC package in use today by many electronic devices, consumer products, military equipment and medical instruments is known as “Ball Grid Array (BGA)”. The BGA ICs are widely used in computer motherboards, mobiles phones, RAMs, memory modules and other telecommunication and military devices. This IC packages comes in variety of types in which the popular ones are fine pitch BGA or FPBGA. These FPBGAs are from the category of CSP (Chip Scale Package). The CSP package is the one which has the package area less than or equal to 1.2 times of the die and the ball pitch must not be greater than 1mm.

The BGA package ICs are extensively used devices that are preferred by designers in their layouts as they have high pin count and high component density hence it eases the layout routing topology and provides more space on PCB board for more component placement and more space for tracing. Some of the applications of BGA ICs are in Field Programmable Gate Arrays (FPGAs), Microprocessors, Microcontrollers, ADC, DAC, Signal Processing ICs, Image Processing ICs, Video Processing ICs, Memory Modules, SRAMs, laptop RAMs like DDR3, MEMS (Micro-Electro-Mechanical Systems) digital sensors like Gyroscope, accelerometer, temperature sensor and many other.

The scope of discussion of BGA IC based PCB layout guide cannot be completed unless we know the properties of BGA ICs. As the number of pin counts in electronic circuits is increasing due to increasing use of I/O ports in circuits like FPGA, so the implementation of BGA ICs is increasing. This is because the BGA ICs have a unique style of pin arrangement. The pin arrangement in BGA ICs are in the form of 2D grid shape. The 2D array of pin arrangement in BGA ICs make them highly suitable in applications like FPGA, DSP and others. The pins are in the form of solder balls that resides inside/underneath the BGA package unlike that of QFP package where the pins are in typical counter clock wise direction, only found on the border sides of package and resides outside the QFP package/body. The diagrammatic comparison of the LFBGA100 (Low Profile Fine Pitch Ball Grid Array) with 100 balls and LQFP100 (Low Profile Quad Flat Pack) package with 100 pins is shown below. You can see the tremendously beautiful package arrangements these two are. Both of them have their own pros and cons. We shall compare these two below.

Comparison of BGA and QFP Packages: 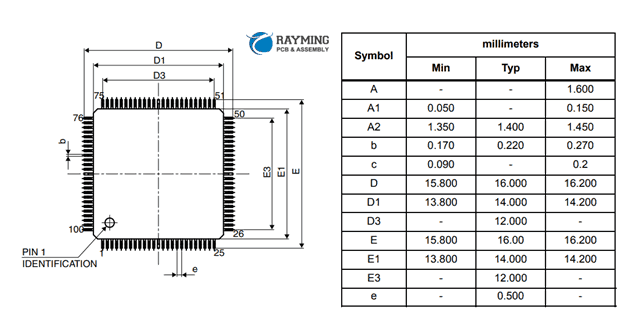 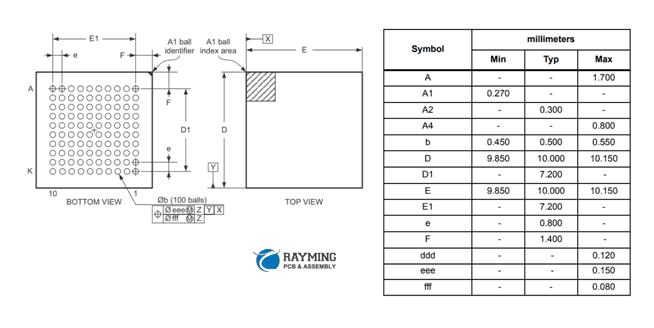 As can be evident from the diagrams above the major advantage of BGA package is its high component pin density. The other advantages are mentioned below

The commonly used BGA pitch types are 1.00mm, 0.8mm and 0.5mm. The pitch is the distance between the two consecutive pins in an IC package. There are many suggestions and recommendations that a designer can follow however it is better that the designer uses his/her experience while dealing in BGAs.

It is recommended that the NSMD style landing pad be used in BGA packages. The NSMD pads are those in which the pad is not covered by solder mask. In the case of SMD (Solder Mask Defined) landing pad the pad is covered with solder mask. The following diagram better illustrates the concept 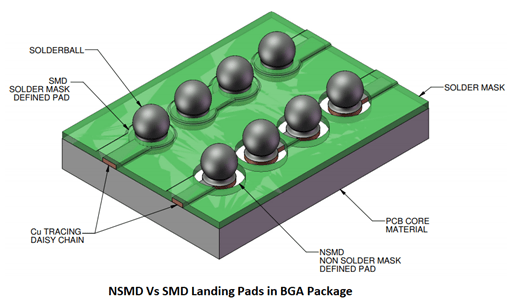 The above table shows the typical gradual decrease in pitch from 1.5mm to 0.3mm. The solder ball diameter also decreases. Have a closer look in the difference between the NSMD and SMD pads details, mask openings and copper pad and trace dimensions. You will see that for 0.3mm pitch, in NSMD the copper trace can be as thin as 3mil wide and copper pad dia can be as small as 6mil as compared to 4mil and 9mil SMD counterparts respectively. Hence NSMD is preferred for BGAs over SMD landing pads.

The number of layers on PCBs that contains the BGA IC is recommended to be determined by a simple formula.

This is a very simple and handy formula for a PCB designer to determine approximately how many layers will be required for a particular BGA package to route easily. Normally the BGA package’s 60% of the ball pins are used as signals and remaining 40% are used as ground or power. These 40% ball pins are routed to the ground or power plane by means of blind, buried or through-hole vias.

Now suppose the BGA with pin/ball count of 1156 and routes per channel we decided to be 1 (how we decided will discussed below), so the number of layers will be 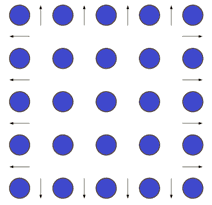 Now the Channel is defined as the space between the two adjacent balls/pads of BGA that allows the trace to “escape”the body/package of BGA to another point by means of multiple layer connected through “vias” in multilayer PCB. The NSMD type landing pad allows greater space for trace to escape easily between two pads and also gives more room for via placement between two pads either diagonally or inline.

You can see in the figure that the number of landing pads are shown and the arrow sign shows the channels available for traces to escape. So we can determine from this figure that a 5x5 BGA package can have 16 escape channels. This can be written is simple formula as

Now in the above example the BGA ball count were 1156. So we calculated the number of channels as

The routes per channel is determined by the minimum space required between traces/routes and the trace/route width. The minimum area for signal routing is thesmallest area that the signal must be routed through. This area is calculated by this formula

The above table show that by reducing the trace and space size, you can route more traces through g. Increasing the number of traces reduces the required number of PCB layers and decreases the overall cost. The below diagram shows the example of single and double trace escape routing technique

The decision on how to place a capture via pad in between the two surface landing pads is dependent on three aspects.

The following figure gives a brief illustration of how a capture via pad is placed in between the two landing pads. There are basically two ways of placing via capture pads 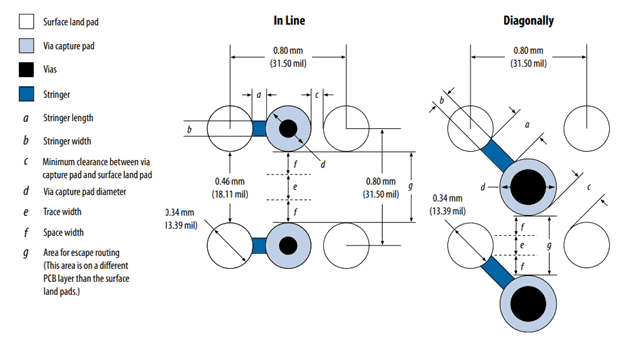 The basic formula is represented in the form of table below for 1.00mm, 0.8mm and 0.5mm BGA pitch technologies

There are numerous layout techniques a designer can implement in routing, placement and optimization of PCB layout based on BGA package ICs. However the PCB fabrication shop constraints, overall PCB manufacturing cost and end application requirements are driving factors one the basis of which a designer can use his experience in appropriate and optimum BGA based PCB layout design.