The quality of electronic products in manufacturing industry is directly proportional to the quality of PCB design and fabrication process. PCB manufacturing consist of many steps from beginning to end for example image printing, etching, development, copper plating, cleaning, component placement and assembly. But before all these steps, the PCB manufacturing equipment installed on the conveyer belt have the system that will detect the correct orientation and placement of bare PCB.

These machines use optical imaging system that detect by radiating the signal on the “fiducial mark” and then the signal is returned back by giving information about the coordinates of fiducial mark. These coordinate information is matched and compared by these manufacturing equipment with the preset standard values. If these values are found equal or with a small error within tolerance limit then the machine allows the PCB to continue forward on the conveyer belt to the further processes of printing, mounting and soldering of components.

What is Fiducial Mark..?

So the fiducial mark is the symbol that is placed by the PCB layout designer on the PCB layout and that symbol is sensitive to optical devices that irradiate upon this symbol thus getting its position coordinates. If these marks are unmatched against pre-programmed standard position coordinates data then machine on conveyer belt will stop the process and raise the alarm to show the incorrectness of position or in correct alignment of PCB.

We can say that the correct positioning of fiducial mark on PCB will ensure correct alignment of PCB on manufacturing assembly lines. Today many PCBs are based on majority of SMT components, so it is highly important to realize the significance of fiducial mark to ensure high accuracy of alignment and positioning of SMT component assembly that will ultimately lead to high quality and efficient product. 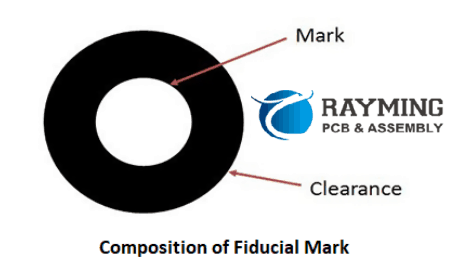 It is vital for the design engineer to understand the requirements of fiducial mark and how to make and place the fiducial mark on PCB. The fiducial marks are actually for SMT assembly machines. With these marks these machines exactly know where your board is. These high speed pick and place robots/machines needs boards to be placed very close to perfection so that miniature 0201 size components can be accurately placed. The need of fiducial marks originated by the increasing use of small pitch 2mm BGA microchips. Below are the useful guideline about fiducial marks.

The mark is the inner boundary of fiducial mark and is normally taken to be 1mm diameter. This is the solid circle of bare copper plated with nickel or tin and coated with inoxidizable material which is transparent.

If the diameter of fiducial mark is R then diameter of clearance should be 2R but not greater than 3R.

If your board contains BGA, QFN and QFP ICs either one or more than one than the fiducial mark on corner of each IC is recommended.

If the fiducial marks placed on opposite sides are in symmetrical pattern then there is a chance that the assembly machine will not raise the incorrectness alarm for 180 degree inverted board placement. This is because board if flipped 180 degree in reverse direction and fiducial marks placed “symmetrically” then after flipping / swapping they will interchange their places exactly and “deceive” the assembly line optical machines. This case scenario is worse because the assembly line will not stop and alarm is not raised and wrong placement of components continue at fast pace of manufacturing speed and hence results in faulty board manufacturing thus wasting, resources, material, time and money.

The fiducial marking is not useful when you place components by hand on PCB.

The fiducial marking is not necessary for low volume manufacturing or prototype PCBs.

The fiducial mark color should be in contrast with the clearance solder mask color.

The distance between clearance of fiducial mark and any other metal point on PCB should be at-least 5mm.

The deviation error or the change observed by optical machine in fiducial mark should be within 0.025mm. The error exceeding this limit will raise the alarm, stops the process and downgrade the manufacturing efficiency.

The fiducial mark surface flatness error should be within 0.015mm. Otherwise lower levels of smoothness in surface will cause alarm, process stoppage and manufacturing efficiency is degraded.

All the fiducial marks on the board should be identical in size and shape.

The distance between the fiducial mark clearance and board edges should be at-least 3.5mm

For mass manufacturing of PCB boards, it is recommended to use fiducial marks as per the guidelines described in this article. As robots are not intelligent like humans and they totally rely on program fed into their memory / database hence it is vital that fiducial mark placement should be considered carefully and any bad fiducial mark can have worst influence on complete mass manufacturing process of PCBs.