Why Use Ceramics Material to Make PCB?

A layer of lead-tin resist is pre-plated on the copper foil that needs to be retained on the outer layer of the board, and then the unprotected non-conductor portion of the copper is chemically etched away to form an electrical circuit.

Developing: The portion of the dry film that is not irradiated with ultraviolet light is dissolved by the weak alkalinity of sodium carbonate, and the already irradiated portion remains.

Etching: According to a certain proportion of the solution, the copper surface exposed by dissolving the dry film or the wet film is dissolved and etched away with an acidic copper chloride etching solution.

Stripping: The protective film on the line is dissolved according to a certain proportion of the potion at a specific temperature and speed.

Stripping: The film is removed from the surface of the circuit board by using phoenix liquid to expose the unprocessed copper surface.

Etching: The unwanted underlying copper is etched away with an etchant solution, leaving a thickened line. Among them, auxiliaries will be used. The accelerator is used to promote the oxidation reaction to prevent the precipitation of cuprous mis-ions; the repellent is used to reduce the side erosion; the suppressor is used to suppress the flow of ammonia, precipitate copper and accelerate the oxidation of copper.

New lotion: Use ammonia monohydrate containing no copper ions, and remove the residual liquid on the board surface with ammonium chloride solution.

Conditioning: This procedure is only applicable to the immersion gold pcb process. The excess palladium ions in the non-plated through holes are mainly removed to prevent gold ions from sinking in the gold sinking process.

During the etching process, the liquid will form a water film on the plate due to gravity, which hinders the contact of the new liquid with the copper surface. 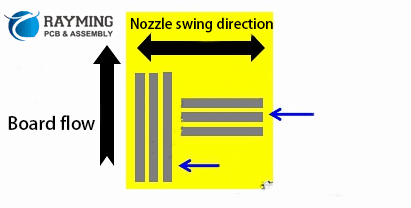 Because the etching speed is too fast; the composition of the syrup is biased; the copper surface is contaminated; the nozzle is clogged; the temperature is low, and the copper etch is not completed. Therefore, it is necessary to adjust the etching transport speed; re-check the composition of the syrup; be careful of copper contamination; clean the nozzle to prevent clogging; adjust the temperature.

How to Do Printed Circuit Board Failure Analysis?

What is Thermal Consideration in PCB Design?

What are the Various Electronics Manufacturing Standards?