You have experienced many times your laptop or you PC (Personal Computer) or smart-phone getting hot while you are using it continuously specially while playing high definition games. This is because of the high speed processing circuits  being fabricated on High Definition (HD) PCBs specially on motherboard and graphic cards. These high speed digital circuits mainly consist of BGA ICs, CSP and other lead and lead less IC packages with fine pitch in SMT technology. As these components are very closely/tightly assembled and are designed to perform numerous function simultaneously hence they create a high performance PCB with high operating speed/clock and working without failure hence high reliability. These PCBs are light weight and small in size hence specially designed to be used in compact electronic products as mentioned above.

While these PCBs are mostly consumer electronic items like mobile phones and laptops so they are operating 24/7 on battery system like Li-po and LiFePo4 and batteries are constantly charging and discharging. In this process these PCBs generate much heat. Same is the case with LED Light bulbs we see commonly used in houses, offices, malls, restaurants etc. They also generate heat but these LED light bulbs are based on the Metal Core PCBs (MCPCBs) widely used metal for the base substrate is Aluminum. While these microprocessor, graphics cards and central processing PCBs use variety of techniques to cut down the heat generated, it is important to understand why they generate heat.

The heat is generated by a semiconductor device like microprocessor, ADC, memory, graphic card, power devices like switch mode power supplies (SMPS) MOSFET transistors, IGBTs or any device is because of the amount of current flowing through it and electrical resistance that in turn relates to the power rating (Wattage) of the component. The higher the wattage the more the power will be dissipated by that component. Temperature is the measure of heat generated by component expressed in OC or OF. The junction temperature (Tj) is the maximum amount of heat a semiconductor component can generate during operating higher than the case temperature and component's exterior environment temperature . In most semiconductor devices datasheets Tjmax is used to select the adequate heat sinks of the component by calculating "case to ambient" thermal resistance. If the temperature of component while in operation/working exceeds this limit then it will cause thermal breakdown and serious injury to component. This in turn will greatly reduce the overall reliability and stability of product. So the problem to the excessive heat generation is controlled by introducing Metal-Core PCB (MCPCB)

The overall heat generated by a electronic product/device/gadget is mainly comprised of heat generated by high power component itself, heat due to PCB and heat conducted in exterior of component body. The major factor is the heat generated by component. So thermal dissipation issues are resolved by applying various techniques during PCB layout and component placement on PCB. The thermal conduction path (or path of heat travel) from component to end heat dissipater like heat sink or radiator have "thermal resistance". Just to remind that the heat is transmitted from one body to other through a medium (solid or air or fluid) by three ways. 1- Conduction (When the two bodies are in physical contact e.g. solid) 2- Convection (when water boils the hot water vapors will go away from heat source e.g. fluid) and 3- Radiation (heat transmitted through air). However in PCB the heat is only "Conducted". The objective of the thermal design considerations is to reduce the "Thermal Resistance" so as to efficiently conduct heat from component to heat sink. The lower the thermal resistance the better. The figure below observes a common semiconductor IC package installed with heat sink. 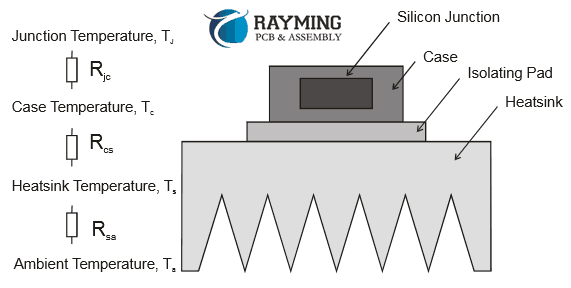 The general formula for Junction temperature is given below

The values of Rcs and Rjc are available in manufacturer datasheets. Rjc is a fixed characteristic value. Ta is the ambient temperature or initial temperature. So we can find the one unknown that is Rsa while other parameters (Rjc, Rcs, Pd, Tj) are available in component datasheet. Ta is normally 25OC.

In the case when the component body is in direct contact with PCB and component assembled on its front side, a convex hull is formed on a metal substrate and the back of the component has the convex hull of pits, and a thermal interface material like thermal paste or adhesive will bond the substrate to the component. The convex hull of the peripheral wall forms 90 degree angle with metal substrate of LED and the flux will be easily filled in convex hull at angle normal angle circumferentially by means of through hole during LED soldering process and solder wetting. This will greatly enhance the thermal performance of PCB and makes strong solder joint.

In the case when the component pins are directly connected to PCB surface but the body of component is not in direct contact with PCB then the thermal Interface Material (TIM) is used to interface between the component and  heat sink. The thermal Interface Material (TIM) fills gap and voids to ensure efficient heat transfer, between device/component and heat sink. The adhesive thermal conductive tape is used to stick TIM and component/device's thermal pad. 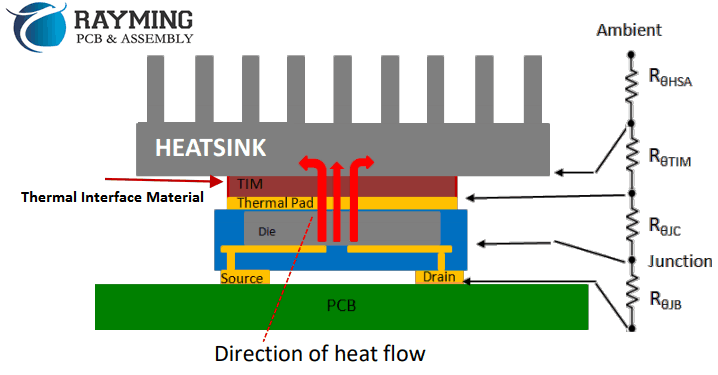 The TIM is used between component's thermal pad and external heat sink. The diagram above shows the thermal path for a  Power GaN MOS transistor package device (GS61008T).

The metal core PCBs are highly popular for use in power electronic devices that generates heal like devices containing high drain current MOSFETs, Switching supply circuits, LED light circuits and others. The below diagram shows the basic arrangement of layers of MCPCB. 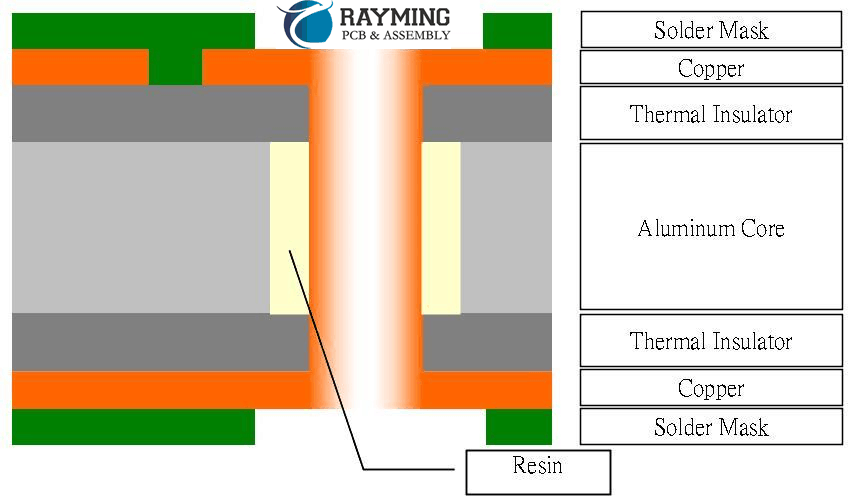 The metal is usually selected to be aluminum or copper for the base material of MCPCB. This is connected by means of through holes or thermal vias to dissipate heat externally to heat sinks. The thermal conductive and electrical insulator layer is present on top and bottom of aluminum core. While the copper layer is on top of insulating layer to form signal layer for signal traces/tracks. Because components are arranged in tighter PCB board space so the heat can be generated by components and PCBs so MCPCB is better option to provide thermal management. By using MCPCBs as the core of high power devices like LED lights the power density can be increased and heat dissipation is effective and overall product reliability is increased by restricting EMI issues. Aluminum core is recommended over copper due to better performance in terms of thermal resistance and electrical conductivity. The thickness of metal core be selected adequately to minimize the weight of PCB.

Previous Post: Tips For Evaluating A PCB Manufacturer or A PCB Assembler
Next Post: Primary Material for Flexible PCB