Printed Circuit Boards (PCBs) have been the focus of scientist and engineers to bring novel ideas on how to improve the quality of end electronic product. As PCBs play the key role in functionality and performance of any electronic product or device so the perfectly designed PCB layout is highly important. There are many factors that a design engineer must consider while designing a PCB layout and these factors are driven by the requirements of end product.

Like number of layers PCB, size and dimensions of PCB, number of electronic components to be soldered upon PCB, types of components, routing techniques and many other PCB design factors. Among them one of the most important aspect is the “Impedance Matching”. The PCB that is dedicated for the electronic product that is to be used for High frequency application like RF or microwave electronics, then the most critical part of the PCB layout design is to control the impedance of the circuit.

What is Signal Reflection.?

As we are familiar with the phenomena of reflection that when a light ray is incident on the mirror then the light is reflected from mirror’s surface. Another example is water, when light enters the water some of the light is refracted while some is reflected. The same phenomena is with electrical signal. The signal reflection is the phenomena where the source transmits the electrical signal in the signal trace to the receiver/sink and some part of the signal is reflected back from receiver/sink back to the source. This reflected signal can cause signal distortion and oscillation in the circuit.

Why the Signal is reflected..?

Fortunately, the signal reflected from receiver is always less in strength then the main signal, hence the reflected signal is again transmitted and then again reflected with lesser strength, and hence in this way the signal is diminished slowly but will cause a temporary oscillation.

The reflected signals from receiver end if are strong enough then they can possibly change the logic state of digital circuitry hence the circuit will behave in unanticipated manner. Distorted signal are sensitive towards noise.

How is Signal Reflection Calculated.?

As an example scenario refer to the diagrammatic representation of the signal trace between two points A and B on the PCB.

In the above diagram signal (Vi Voltage and Current Ii) Vi incident from source A to sink B. The characteristic impedance from A to B was continuous but from point B the impedance of signal trace changed hence changing the voltage Vo and current Io transmitted onwards. The characteristic impedance from A to B is Zi while from point B it is Zo. Keeping the picture in view above, for point B looking from left, we can write using ohm’s law as

Now looking at point B from right, line impedance is now Zo then we can write for Vo as

Now there are two cases

Case-1: The Impedance is not discontinuous and Zi = Zo

In this case if Zi = Zo then we simply get Vo = Vi means the transmitted voltage is same as incident voltage Vi and no signal is reflected.

Hence we can write

This term with the impedance is called the reflection coefficient “Rc”.

The value of Rc can be from -1 to 1. But ideally Rc should be zero

In this structure arrangement, the source is simultaneously feeding the signal to more than one sinks or receivers. All the nodes/receivers connected in parallel or star fashion are synchronized with source. However the separate termination resistance is required for each node/branch and must be compatible with characteristic impedance.

Here the one transmitter or source is connected in daisy chain or series fashion the output of one is connected to input of other. A simple series resistor can be placed close to the driving/transmitting/source end to make the impedance at the receiver side compatible with characteristic impedance. The daisy chain branch length should be kept as short as possible. However the signals received at different receiving ends are not synchronized with main transmitter.

There are two ways to terminate the signal trace. Either from the source end or from the sink end.

A simple series resistor placed between source and load and close to the source will do the job.

There are 4 ways to make signal termination at load / sink end. 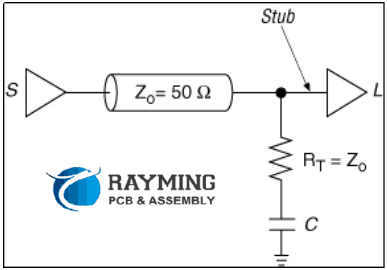 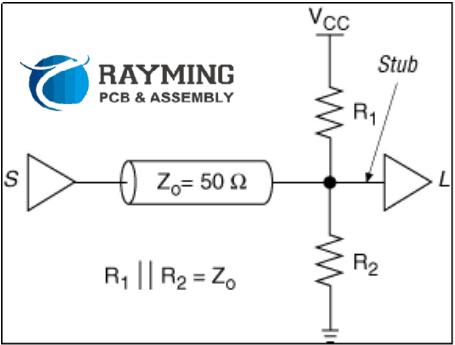 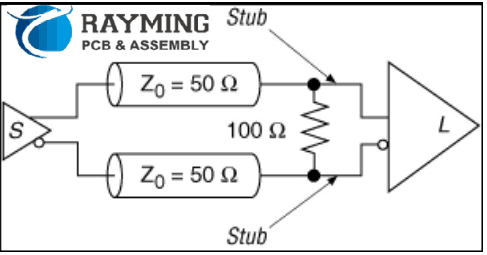