Science has modernized to so much extent that even a smallest microscopic bacteria can be observed, a crack in PCB track can be identified to the extent of highest precision, the farthest stars in the universe billions of light years away are now under observation of scientist nowadays, stock markets are talking the monetary exchange in billions and trillions of dollars, processing speed of processors / controllers have reached Tera Hertz and so on and so much there is to discuss. But the fundamental of all these definitions is the basics of number system.

These values / quantities are represented in “numbers”. A number is a something that represents the quantity or amount of anything. A set of real numbers is all the numbers that exist in the universe except the imaginary (Complex or Unreal) numbers.

Any number either it is electron valence number of Uranium atom, length of DNA, smallest bacteria size, PCB smallest grain size, size of largest planet of our solar system, distance between galaxies in light-years in our universe, number of transistors used in our laptop microprocessor, number of hairs on our head, number of pixels of our camera it is called “Real Number”. Real numbers are then further classified in integers, even numbers, odd numbers, whole numbers, prime numbers etc.

Too Small or Too Large Numbers:

The mathematical problem occurs when someone is dealing with numbers that are very large or huge. Like negative charge of electron is 1.60217662 × 10-19 coulombs or the distance between Sun and Earth is 149.6 million Km. Now how would we write these numbers is a question. If someone writes these numbers in zeros form it will be like this

The S.I unit of distance is meter (m) and for charge is Coulomb (C)

These types of numbers are called “Scientific Numbers”. They are denoted in special way as we call it “Scientific Notation”

For example, one electronic charge has total 9 significant digits. “160217662”. All other digits are 18 zeros after decimal. In order to eliminate these zeros, we introduce the “power of 10s”. We will shift the decimal point to the right one by one and increase the power of 10 by negative 1.

Example showing the shifting of decimal to the right and we have stopped the shifting decimal the smallest non integer number that is greater than 1 and less than 10.

The zeros that are not significant on the left are removed and number is written starting from first significant digit.

This is the standard method to write a scientific number. 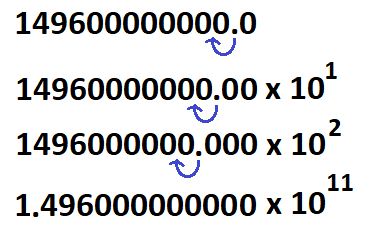 The zeros that are not significant on the right are removed and number is written starting from first significant digit. Hence the standard method of writing scientific number will be

This means that 1.496 multiplied by 10 raise the power 11 or 1 followed by 11 zeros. With the help of these scientific notations we can write them easily and compactly on paper and easy to identify the significant digits. This number has total 4 significant digits and they are 1, 4, 9 and 6.

What are significant digits..?

The significant digits of any number are those digits which shows the accuracy of that number. For example a truck weighs 5000 Kg. So when we say that, it does not mean that a truck with mass 5000 Kg is “exactly” 5000 Kg. But we have actually rounded out the figure to the nearest units or tens.

Like if the truck’s actual weight is 5002 Kg then we can say it is 5000 Kg approximately (rounded figure). Thus a number 5000 has only 1 significant digit which is 5. The leading zeros are only placeholder zeros. These place holder zeros do not have any significance as per rule.

Difference between Precision and Accuracy:

Many people take these two terminologies as same. However they are very different when technically speaking. A lay man can use both terms interchangeably but a person having knowledge of mathematics and number system specially “Scientific notations” will surely know the difference.

For example a power supply has the output DC voltage of 12.562 Volts. This shows the exact value of output voltage. But we can round off the value up to the 1st decimal place and write 12.6 Volts. This 12.6V is less accurate result and giving lesser information as compared to 12.562 V showing more accurate result with more information. The value 12.562 V shows 12V and 562mV. This 562mV is the ripple voltage that information was not found in result of 12.6V. This is very common factor when analyzing Switch mode power supply output voltage parameter. Fluctuations in the 2nd and 3rd decimal place will show how much the ripple voltage is and that indicates the quality of Power supply design.

Precision shows closeness of two or more readings to each other of the same quantity. Your readings may be precise but not accurate. Precision and accuracy are two different things.

For example a DC power supply is rated at the output voltage of 12.0 V. Now you take 3 readings by using available lab DMM. You got readings 9.12 V, 9.11 V and 9.15 V. In this case you can say that your reading was precise but not accurate. Because your readings were precise up-to the 2nd decimal place but they were far away from standard or correct value, hence these readings are precise but not accurate.