1. The Quest of PCB Manufacturing  Cost

To reduce cost to some extent PCB development customers combine more than one PCB design files into one final file and then generate Gerber files. Gerber format is one of the most leading formats understood by the manufacturers. To produce one PCB Gerber file data after adding multiple PCB designs i.e., array of PCB designs is called PCB Panelization. PCBs are panelized after designing all PCBs and before to generating gerber data. It is usually done in two different ways:

1- Multiple copies of same PCB are combined in one PCB i.e., an array of PCBs.

In this case the extra charges are not added in manufacturing price. It is very popular in high production setups.

2- Different PCB designs are combined to one PCB file

In this method multiple different designs are added to same PCB panel. It becomes slightly complicated task for manufacturer to cut, package and ship different PCBs. An additional cost is added to total manufacturing cost of PCB. Customers generate one gerber file rather than multiple gerber files to save one time manufacturing cost. However, as a whole, it gives benefit to customer to save a handsome amount at manufacturing PCB phase. Both can be used for cost saving strategies for prototype testing and small scale PCB productions. 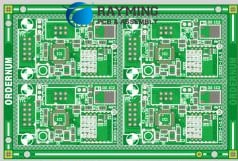 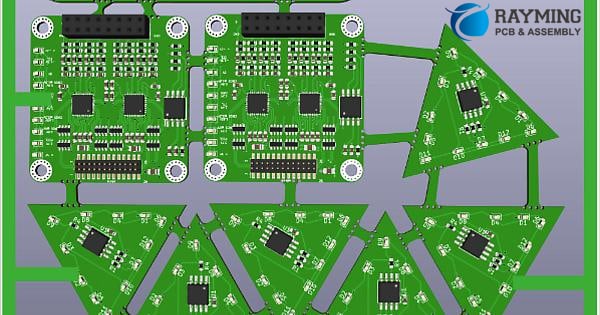 A PCB for large scale production purposes i.e., for massive production of single PCB in form of PCB array is connected together physically as in Figure 1 and Figure 2. It makes it easier to move PCBs array across the assembly line much like a electronic component tray. The individual boards are easily separable after assembling for QC-inspection or to fit into the product enclosure. For production of tens of thousands of PCBs, component placement for PCB Panelization also does matter. Especially connectors and components hanging off the boundaries of PCB can create difficulty in PCB assembling process.

Some PCB assembly contractors require minimum size of PCB to fit in a conveyor. A smaller size PCB which cannot fit physically within conveyor is needed to add small catch-in-hold area for processing.  This extra PCB area is removed after PCB assembling. The situation is more complex in case of odd shaped PCBs. The rectangular PCB shape does fit easily in a panel however curved and odd-shaped PCBs need also some extra PCB area for handing by SMT conveyor. This situation can complicate PCB Panelization or assembly. Rectangular PCBs can be placed ideally both in vertical and horizontal axis. The CAD Software tools alongwith guidance of manufacturer and assembler can lead to early time measures. By involving manufacturer, assembly and PCB design engineer maximum benefits can be reaped.

Typically PCB manufacturers run standard panels sizes like 24 x 18 inches. They need 0.5 inches clearance from components on the perimeter of panel.  So 23 x 17 inches Panel size is actually available panel space for manufacturing. They need small gaps i.e., 0.1 inches for routing board arrays which is another unusable panel space. The PCB developer may get help to use panel space effectively by using calculation Tools available by manufacturers or online. PCB panel area is shown in Fig 4. 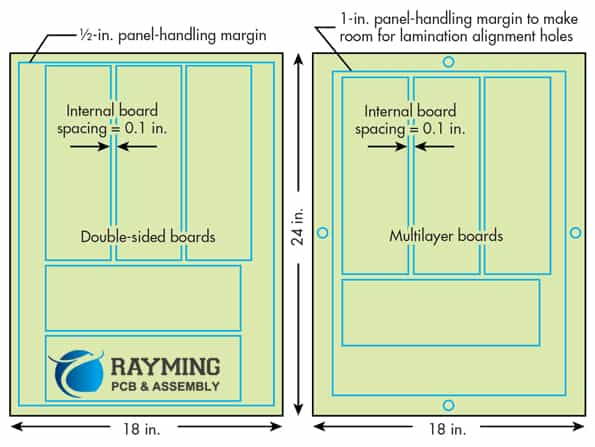 A V-groove is way to split panelized PCBs. It is a small “V”-shaped cut on top and bottom side of panel leaving a small easily breakable base pcb raw material. The PCBs remain intact unless they are separated by applying a small force. The advantage of V-grooves is the distance between two boards is 0 inches. 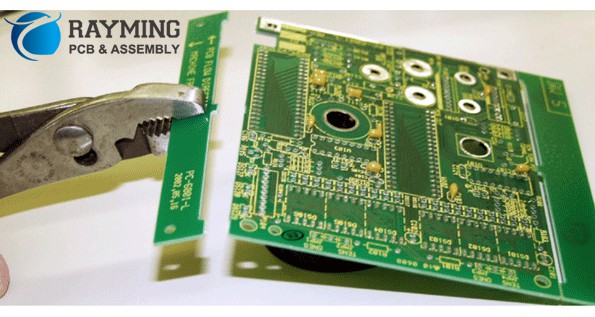 1- The Panelization is much popular among  producers for cost and time saving, ease of shipment, easy fitting into assembly plants etc.

3- Prototype PCB panels can add multiple different designs. It saves one time cost which is applicable by manufacturer. So multiple PCBs can be made in one go only on extra cost.

4- In assembling process the Panelizationprotects PCBs from vibration and shock jerks.

5- Maximum PCBs can be manufactured form a standard size panel.