PCB Blog
Two-Stage Mode to Achieve High Voltage
Top ten common problems with PCB copy board
How to Draw Schematic Symbols Simply and Easily(2)
Privacy Policy
How Do I Place an Order?
The Capabilities of PCB Fabrication
Pin in Paste (PiP) Technology in (PCB) Printed Circuit Bo...
Epoxy Resin Used for CCL in PCB and Its Development Trend
PCB Design Strategies for Parallel Micro Strip Lines base...
The PCBs Defects and its Solutions
A Comprehensive Introduction of Ceramic PCB
Things to know before Ordering PCB Project
How to Select PCB Coating for PCBs' Optimal Performance
The Difference between Footprints and Land Patterns
The Services of Printed Circuit Board (PCB)
Exclusive Layout Tips for BGA Chips
The Services of Prototype PCBs
Top 10 Best PCB Design Tools
Different Types of PCB Soldering Processes
The Options of PCBs Thickness

The constantly improving technology of electronics devices and circuits, the need of miniaturization of electronic products is in demand in today’s market place. Hence a complete product with all the components and circuitry on one single PCB has a great potential. This art of assembling all components in an optimum fashion so as to avoid any problems in performance of device and improve quality of performance of device is in high demand. The circuit designers and PCB layout design engineers with experience in this art are approached by high tech electronic engineering companies so as to become part of their R&D team and cope up with the design issues while also optimizing the design to minimize the dimension of product overall.

In the process of miniaturization of electronic product the low speed analog and high speed digital circuits are mostly placed on one single PCB, thus various issues arise like EMC / EMI and cross talk issues. According to the electromagnetic theory we know that any two current carrying conductors there is a mutual coupling between them that results in noise or interference to be transmitted from “aggressor” to the “victim” or we can say from transmitter to the receiver conductors. We will defined these terms in this article, although this article discusses about the effect on the cross talk intensity between two micro strip lines on PCB by changing various parameters as will be discussed in the section below.

What is Cross Talk..?

The cross talk is of two types. Near End Cross Talk (NEXT) and Far End Cross Talk (FEXT). Suppose two microstrip lines are fabricated on top of FR-4 dielectric based PCB (PCB dimensions 60mm x 20mm) with a distance between them is “d” and length of each strip is “L” and width is “w” and on bottom the image ground plane is fabricated. The distance between the microstrip lines and the image plane is “h” 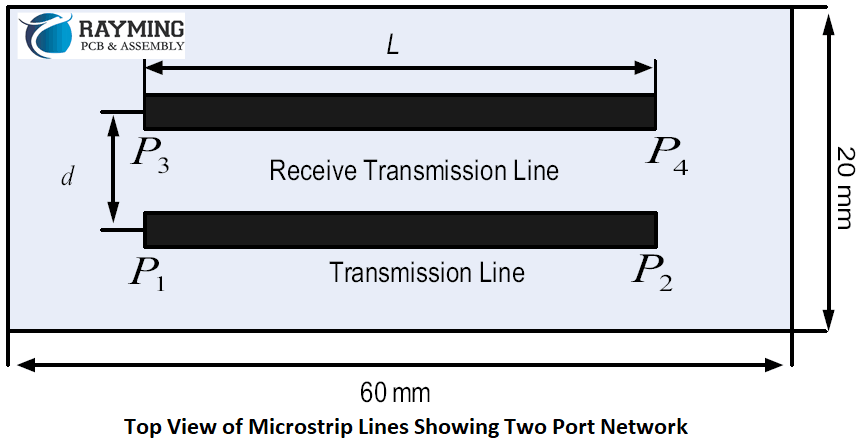 So the cross talk will exist between the two ends of transmitter and receiver as shown in diagram below. The signal line or transmitter or aggressor or generator which is connected to the signal source (Vs) and has the characteristic impedance ZOG while the same is terminated by load impedance ZLG. On the other hand the receiver or victim has no source connected but the characteristic impedance is ZOR and this line is terminated by the load impedance ZLR. Now you have understood what is meant by aggressor and victim. 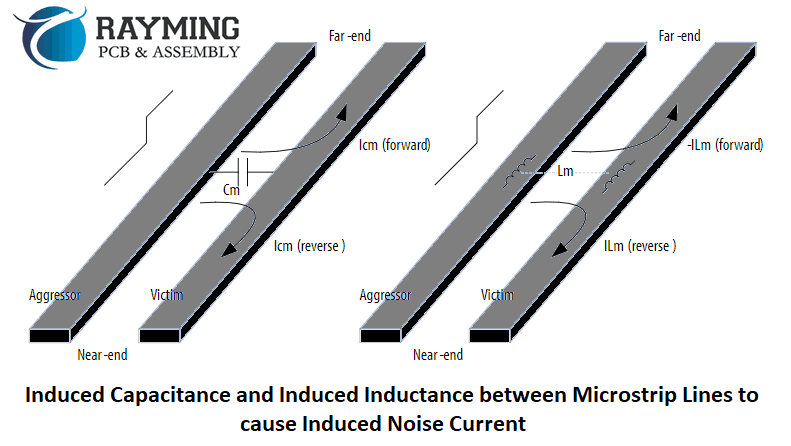 h = Distance between the microstrip and image plane (power or ground) = 0.2mm

For our case we can simply put the values in above equation and find characteristic impedance of our microstrip line for simulation purpose.

Difference between the Microstrip Line, Strip Line and Coplanar Line:

Sweeping the frequency from 0GHz to 15GHz between Microstrip Lines:

Now that we have arranged the two microstrip lines on PCB as discussed in previous section. It is now time to check the behavior of cross talk between the two lines are different signal frequencies. We first check the cross talk signal (noise current) strength at range of frequencies from 0GHz to 15GHz. The circuit is actually four port network with P1, P2, P3 and P4 where we will take (P1, P4) as S14 and it is Far End cross Talk. (P1, P3) will be S13 and it is Near End cross talk. The S-parameters that will be analyzed are S13 and S14. As can be seen from the below graph from our simulation that S13 (NEXT) parameter have low cross talk signal strength while S14 (FEXT) parameter have higher cross talk strength. Also we can deduce that as the distance between the two microstrip lines is increased from d=1mm to d=2mm then the cross talk strength decreases for both S13 and S14. 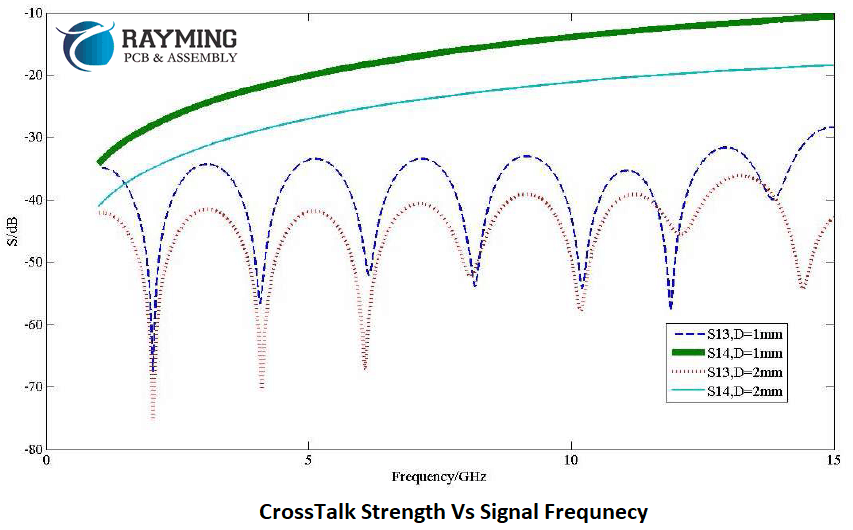 Changing the length of Microstrip lines at various frequencies:

Now we check the influence of changing the microstrip length on cross talk strength.  Microstrip line’s length interval is taken from 5mm to 40mm. The signal frequency of interest is 1GHz, 5GHz, 9GHz and 13GHz. We see that the increasing the length of microstrip line will increase the cross talk strength in dB as shown on vertical axis. Especially in FEXT S14 parameter the cross talk is increased dramatically as the length of microstrip is increased more than 35mm for 1 and 5 GHz frequency analysis. While the same is also observed for 9 and 13GHz frequency range. 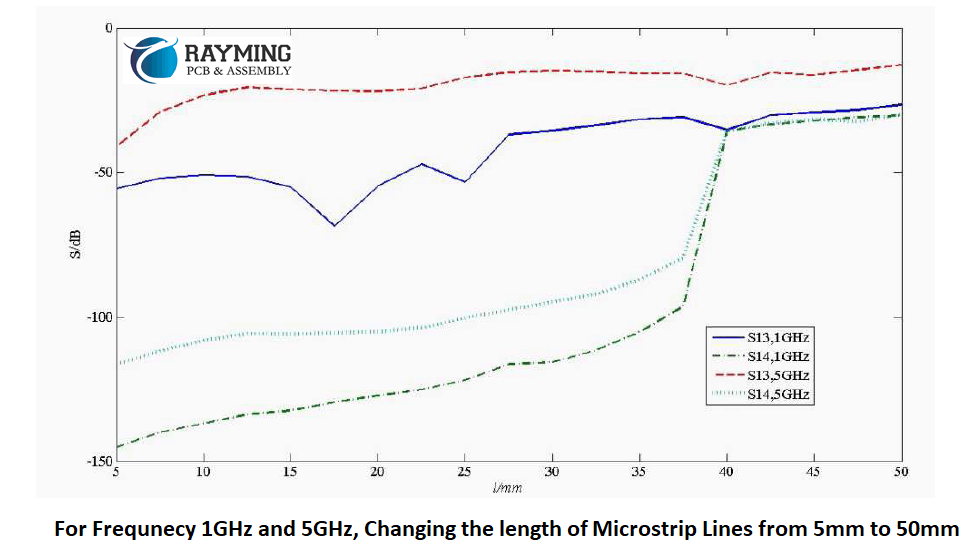 Changing the distance between the microstrip lines:

As we can see that the increasing distance between the two microstrip lines is decreasing the cross talk strength at all four frequencies of interest i.e. 1GHz, 5GHz, 9GHz and 13GHz. However the S14 parameter at 5GHz has higher cross talk than S14 at 1GHz and S13 at 1GHz and 5 GHz. 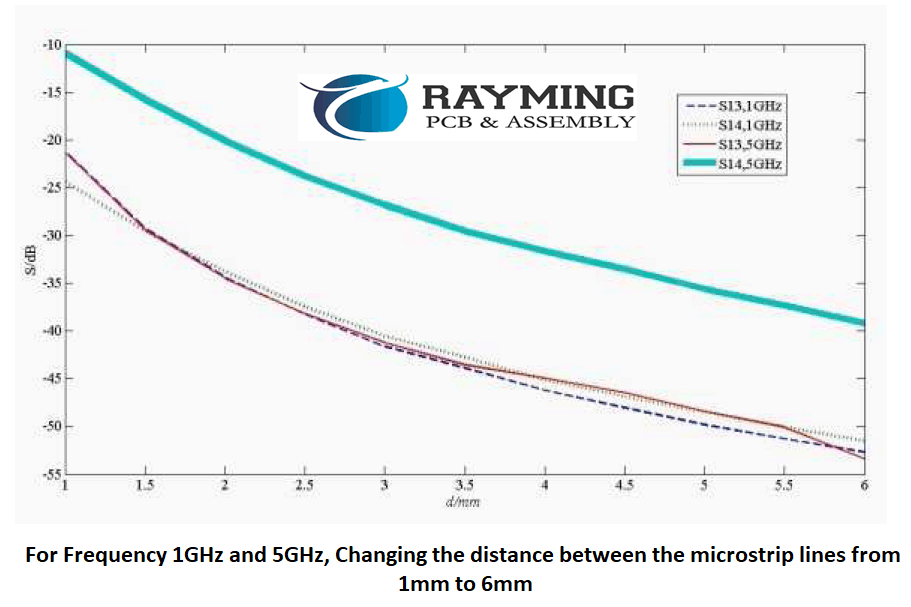 Increasing the Thickness of PCB:

It can be concluded that, decreasing the signal edge rate for high speed digital circuits is not an option because the interval time is very small. So we have to go for the PCB layout microstrip spacing technique discussed above. From simulation results it is shown that higher frequency, closer gap between two microstrips,  longer microstrips and thicker PCBs will cause greater cross talk strength and vice versa. 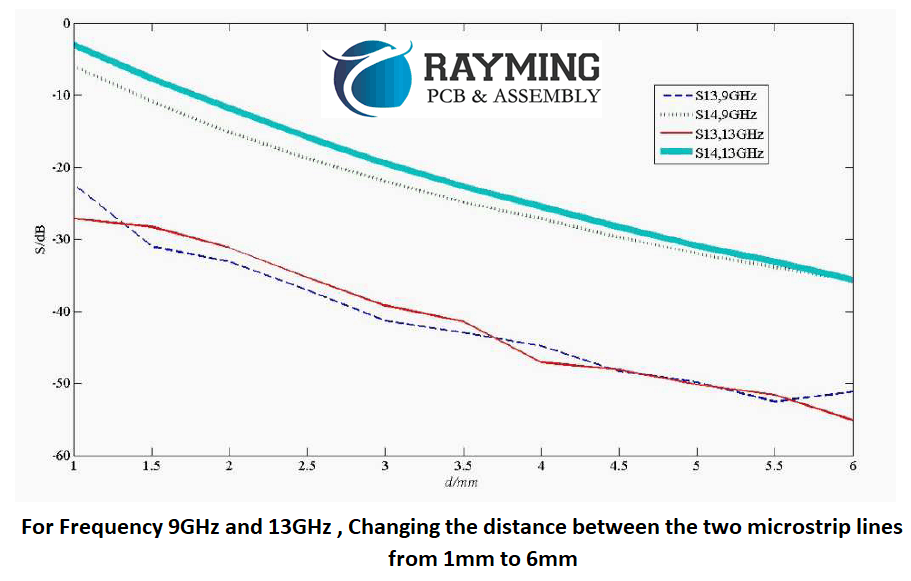 Previous Post: The PCBs Defects and its Solutions
Next Post: Epoxy Resin Used for CCL in PCB and Its Development Trend